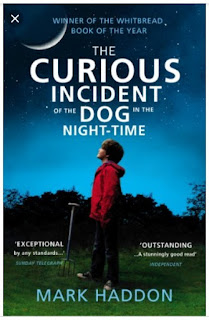 Are you interesting in Autism personality traits and its treatment?

Book Review: The curious incident of the dog in the night-time

The plot is a perfect picture of the way to work the autistic personality and the good way to do with in a particular case.

The curious incident of the dog in the night-time is an interesting novel written by Mark Haddon, a fifteen young boy with autistic personality traits. So, it is the perfect choice to any professional of the mental illness.

Christopher Boone, the narrator, starts investigating the mystery of the neighbour's dog murder just after the supposed death of his mother. Therefore and beyond of the great teaching about the patterns of his personality, the biggest richness of the book is that throughout the character of detective, Christopher is able to go further than never on his own, in the social relationships and thus achieves his personals goals. In fact, it is easy to see how the boy can doing use his taste by dog´s and his passion for finding mysteries, to go through his difficulties to talk with strangers, what will be the begging of different relationships on his world. That´s, he finds a way to use his symptom, in the right way.

The main character is Christopher Boone, a teenager who goes to special needs school, who writes in first person the vicissitudes that is going through as the detective figure. The detective invention has a very important function for the development of his symptom, and because of it, he starts to write a book were he registers the experiences of his investigation. In that way, Siobhan the school therapist has a very important place in the plot, as it is her who encouraged him to write the book and who is going along and holding his writing. Wellington, the dog, a poodle from his neighbour; Mrs. Shears, the owners of the dog; and Mr. Shears the ex-husband of her; are important to the plot too, thanks them, the adventure is possible. The murder of Wellington reminds him of the death of Judy, her mother, and gets Christopher the perfect alibi to delve into the search of the reasons for the disappearance of her. It is a fact, that this is the hidden cause that moves the boy. In the same way, Ed his father and the policeman, have a good place at the novel, as the ones who stopped Christopher on his development but at the same time, who give him the necessary pressure to invent logical justifications to move forward. As it can´t be lacking in psychosis, Toby, his pet, a rat, make this journey undertaken by Christopher, the necessary companion of this boy with autistic features.

In my view, this book is able to show the true nature of the case by case in the psychoanalytic clinic. Along his testimony, the narrator tells us how is managing to find solutions and go on, from its particular logic, which is mathematical logic. It´s a fact, that mathematics are the element that remains unchanged throughout the story and that gives it consistency. What is more, Christopher returned to Swindon to do the first Secondary School exam of mathematic and decided to do the followings levels because, on his owns words, now «I know I can do this because I went to London on my own, and because I solved the mystery of who killed Wellington? And I found my mother and I was brave and I wrote a book and that means I can do anything». This book has too, the huge value of being the social tie between the writer and all of us the readers.

The plot is a perfect picture of the way to work the autistic personality and the good way to do with in a particular case. Then, it is easy to recommend it, to all those who have to do with Autism or Asperser’s Syndrome. Like I said at the beginning, this novel is a must to any mental illness worker.